The Importance of Tactical Obedience

The Importance of Tactical Obedience

We all know that obedience is typically not the most fun thing to do or learn.  The problem is not only is it the foundation of everything you do, it may in fact help save your life and or your dogs. This is even truer of tactical obedience training.

Years ago we never saw the need for tactical type training. The fact is few agencies had Special Operations teams. As time went on the teams became common place in agencies, and today even smaller departments either have their own team or are part of a multi-jurisdictional team. So the obvious questions is why not in-corporate these dogs with the special operations units and how do we do that.  Along the way we found this type of control/obedience can be used in many more of the situations we deal with beside high risk ones.

Tactical Obedience uses can range from Felony Traffic Stops, High Risk Entries, handcuffing situations, building approaches, to actual shooting situations and tracking. Tactical obedience is an easy thing to teach and implement. Of course you first must have good control of your dog and this means very good obedience. But this will actually make everything you do easier.

We start tactical obedience with a basic under heel. This means the dog will heel between your legs as you move forward in a duck walk, or squatting “ready” type posture. You can start out by simulating pointing your hands at a point or target as you move forward just as you would if you were actually holding your weapon on target. The easy way to do this is simply use a toy, ball or food in your hands you are pointing with as this will keep the dogs focus on your hands as they want the reward you have for them. As you move forward the normal command for this would be “under heel” (if you use English). Once you have the dog’s attention and focus on the reward and you’re moving,   you need to reward him right away at first. This teaches the dog that this is a good thing and soon they want to do it as it is another way to play with Dad/Mom. Once you have this started you simply extend the distance you move before paying the dog.  This is the foundation portion of tactical obedience. We like to use this type of heel when we approach a high risk building, burglary in progress etc. We also will incorporate this with “Live Fire” on the range. One reason is we know exactly where our dog is at all times, during this approach and or possible shooting situation.

From that position we advance in to the kneel position from the heel. This means once we have reached our cover area or location we simply drop down to a one leg kneel and the dog should go right into a down from the heel position. Again this allows us total control of our dog and we know at all times where he is. To do this you simple give them the down command when you stop. Soon they will learn it is the expected behavior while doing this movement if you stop and it will become automatic. We can also leave the dog move forward to other cover and then call the dog forward again to under our leg. You simply use the ball/toy or food and hold it down in that raised knee area, which forms a box. We use the command “under” and at the same time get the dog’s attention on the reward. You can also adapt hand signals into this movement instead of voice commands for concealment purposes. As the dog comes forward he goes under your leg after the reward, into a down position and is rewarded. We use this position in an approach or live fire situation.

We go further and teach a tactical prone position. Some people say if you go to the ground you die. I won’t debate the idea of should you nor shouldn’t you do it. I will simply say we teach it as a tool we have available if the situation would warrant, like a shooting and we would be down or need to be down for cover. You can choose not to teach this position; it doesn’t affect the working of the dog in the other positions or movements. You can always change and adapt these ideas to what you prefer or what works for you.  To teach the down, we simply lay flat on the ground and form a box with one of our arms. At the same time showing the dog the reward and then again call him “under”. The reward gives him the target as well as the motivation to come by your side. At first this may be hard as young dogs what to jump on your back and lay looking at you instead of beside you. But they will learn to in time.  A hand signal can be used for this instead of voice if you prefer.

From these position you can down your dog and keep moving forward, move to other cover then call your dog to you in an under position, or prone position, you  can down the dog and then also call them back to an under heel. There really are few limitations on what you can teach and how you adapt it to your particular situation. We have even had a couple guys who have taught their dogs to low crawl under them while moving forward.

If you’re having problems with the dog coming to the right location when you call it you can use a tracking line and reel the dog in at first to get them to come under your leg. Dogs don’t like being dominated so heeling under you, lying under you or your leg can sometimes be a challenge to convince a dog you’re not trying to dominate him by being over top of him, it is simply another behavior he will get paid for doing and it can be a fun thing to do.

Our local training group has adapted this training into live fire work, with assault weapon fire, hand gun fire, confrontational situations, felony traffic stops or arrests, tracking and many other scenario situations.  They like to feel that when it hits the fan, their dogs have been worked with rifle fire, yelling officers, hand gun fire and more so the dogs and the handlers know what to do and what to expect. Of course you have to use caution and not over work this with live fire and possibly damage the dogs hearing. But you also need to know how your dog will react in a shooting situation. They start out with blank guns, change to live rounds and always start with the dog at a distance while someone else fires. Then once the dog is OK with that, they will down stay their dog behind cover, they will move forward and fire. After that they can do the other positions and start scenario work.

Another drill which you can use as a training tool is an exercise called “Gun”. This is done to work on your reaction to a gun situation. The basic idea is if an officer sees a gun being pulled out they have been trained to instinctively yell “gun”. So we then teach a reaction behavior to that being yelled. We teach that you will instinctively drop to the ground in a prone position (for this exercise) with the dog downing right beside you. At the same time the handler should be yelling gun as well. The whole idea is the dog learns to not be affected by you or another officer yelling in a situation, as well as the behavior you expect him to do if the situation arises. This is just another exercise you can practice the control on or adapt it as you wish for what works best for your purposes.

However you choose to teach or implement these tactical ideas is your choice; the important thing to know how you and your dog will react when things get crazy. If you practice it can be a great tool that you can use and be confident in.

This training article is copyright protected. 2020 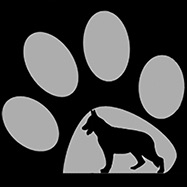