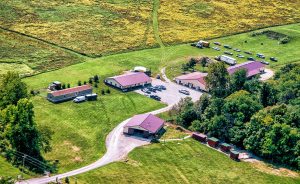 Von der haus Gill German Shepherds was started in 1992 by Al and Susan Gill with the idea of helping families looking for quality puppies by locating breeding dogs of the quality of his police dog at the time. He also felt that he could help officers/agencies locate better police dogs in Europe than they had been able to. Prior to that most officers were forced to normally use donated dogs of any quality or ability. Al made the first trip to Germany and instead of buying one breeding female he bought two and the rest is history.

In 1997 Al and Susan built the first new kennel at the Boundry Rd. location. Each year there after they built another building or expanded existing ones. In 2000 they built the first dormitory boarding for students. Today that building sleeps 7 students at a time in private rooms during training classes/schools.  In 2013 we added our second dormitory which is designed for our female handlers and it sleeps 3. In 2003 Al retired from the Sheriff’s Office and Von der haus Gill German Shepherds was incorporated. In 2007 their son Matt returned from the Air Force and became involved with the business and handlers all detector training classes. Matt and his wife Amy now are deeply involved with the Training/ Breeding operations. In 2013 Al received the K-9 Lifetime Achievement Award from the National Association of Professional Canine Handlers of the USA and Canada. Al also received his third Master Trainers award, this one from American Police Canine Association.

In 2018 Al was named 1 of 2 Govenors for K-9 for the United States, and sits on the National Board of Govenors for Homeland Security Prosessionals, and Global Board for Anti Terrorism and Security Prosessionals through the National Board of Sheriff’s. This is a very Elite honor that given to him, and recogntion for his years of work in Law Enforcement and K-9 Training.

Since that beginning Al, Susan, and Matt have bred over 178 litters of pups (1002 puppies) and imported/ trained over 3500 adult dogs. Our facility has our own puppy fostering program, to raise many of their own pups for law enforcement and protection work. We also have a staff of full-time employees and trainers. Von der haus Gill Kennel has passed every AKC, ATF, DEA inspection, a record they are very proud of.  Their experience and knowledge has set the standard for the law enforcement and companion dog breeding/training industry. Let them help you with that new partner or new family companion!