commands with his new partner,

Spurred by heightened concerns of terrorism, the State Highway Patrol is upping its manpower at the Statehouse — sort of.

The latest addition to the agency’s Statehouse security team is Blitz, an 80-pound German shepherd trained to sniff out 14 potential bomb ingredients.

Besides guarding the Statehouse, Blitz will patrol other government buildings Downtown, work at Ohio State University’s home football games and, when warranted, respond to bomb threats throughout the state.

The 2-year-old animal starts his new job Thursday, but he’s been preparing for the assignment for more than 18 months.

Kennel co-owner Al Gill, a former deputy sheriff in adjacent Allen County, estimates he’s worked with about 1,000 dogs since he entered the breeding business in 1985. Almost half have ended up in law enforcement.

Blitz, he said, stands out.

“It makes us very proud knowing that we bred, raised and trained him and that he’ll be protecting the governor and other people,” Gill said.

Blitz and his human partner, Trooper Matt Lehman, have been training together in Wapakoneta for six weeks.

“If we were to miss something, it could cost people their lives,” said Lehman, who directs Blitz with about a dozen commands — all in German. “We have to be exact.”

Since the Sept. 11 attack, the State Highway Patrol has seen a surge in bomb threats and requests for precautionary bomb sweeps at high-profile events, said Jeff Grayson, a spokesman for the Ohio Department of Public Safety.

Last year, the Highway Patrol fielded 22 requests, Grayson said. So far this year, it has logged 20. Until now, the agency had relied on the nose of Nitro, a bomb-sniffing dog put into service in October 2000.

“If you have to search an area like the Rhodes state office building, that’s a large area for one dog,” Lehman said. “It’s not good to have one dog doing it. They’ll get tired, and they’ll start missing things.”

Lehman, who used to be the handler of a narcotics dog, said he’s certain Blitz will be “an asset to the whole state.”

Ohio taxpayers spent about $4,500 to buy and train the animal, but future expenses should be minimal, the trooper said.

“The reason he works is because of his paycheck, and his paycheck is this ball,” Lehman said, bouncing a yellow tennis ball. “He loves to play.” 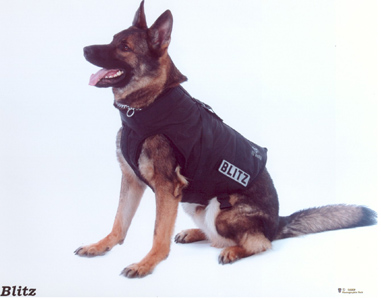